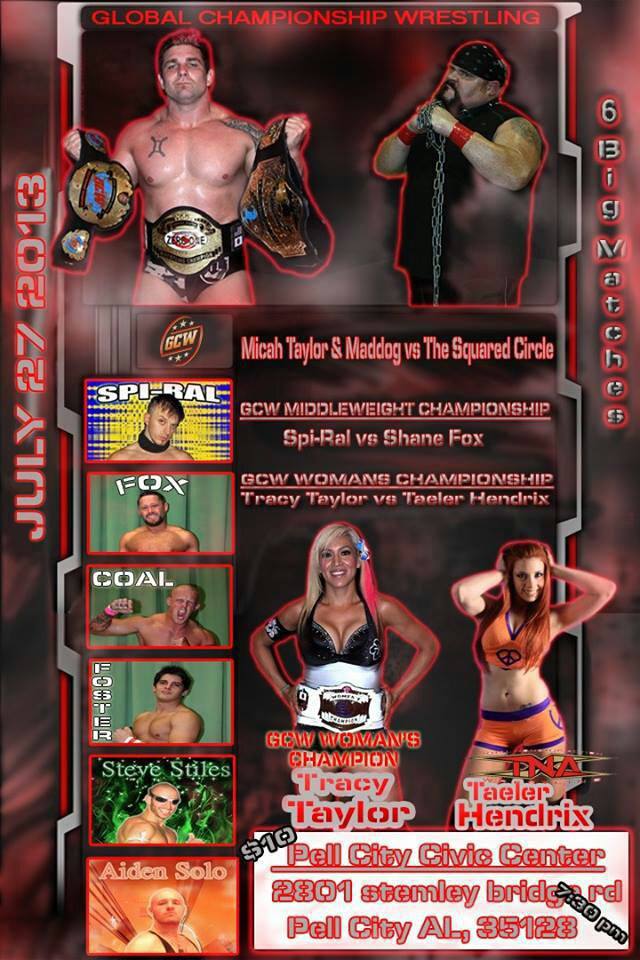 This phrase holds so much truth.. and You have a chance to see how true it is on Saturday July 27th as The Stars of Global Championship Wrestling, The Underground, and now.. The Squared Circle converge on The Pell City Civic Center.

Come join us July 27th as some of your favorite stars take it to the ring!!!

The Equalizer vs Mr. O'Hagan

Scotty Blaze vs The Russian Warmachine

For The All New GCW Middleweight Title: No Countout
Showtime-Shane Fox
vs
Spi Ral

And even more of your favorite Stars & Personalities from GCW & The Underground will be there. GCW Senior Official Birney Kawanawitz, The Real J.J. Tanner, Jeff McGowan, Whitney Leigh, Commissioner "Fast" Eddie Layne and More!!!

And Yes... It Is True!!!
You've read about it on our affiliate sites and pages, you've heard it on GCW Radio... Professional Wrestling Legend Jake "The Snake" Roberts will be joining us in Pell City on July 27th for a special Autograph Signing!

Doors will open at 7pm.. Belltime is set for 7:30pm. Tickets for the event are only $10 Each. Be sure to keep your eyes open here and on our Social Sites for all latebreaking information about this great Live Event. Remember.. You can still reserve Ringside Seating (while they last) by sending an email to GCWMedia@Yahoo.com

If you missed the Live Broadcast of GCW Radio from Sunday night: We covered the entire lineup and heard from Maddog Dan Sawyer, Cody O'Connor, Jeremy Foster, Jake Coal, Damon Khrisofer, JJ Tanner, and Fast Eddie Layne and their thoughts on the show. The Podcast of GCW Wrestling Radio is now available: "Episode 088 - July 21, 2013": http://podOmatic.com/r/gQGxFL3

And As you heard on GCW Radio Sunday Night... "The Camera's Will Be Rolling Saturday In Pell City" (We'll explain more about that in the coming days)... Bring Your Signs, Posters, and T-Shirts.. and come ready to have some fun in Pell City with Global Championship Wrestling!!!