The 2nd Annual Will Grason Memorial: A Day of Legends, A Night of Champions will be unlike any show in recent history. The day kicks off with the first ever Georgia Wrestling Hall of Fame & Museum induction banquet at noon. 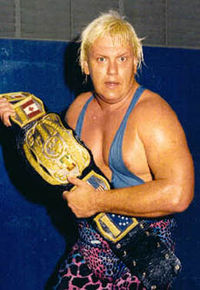 
We are working on a full web site for the Georgia Wrestling Hall of Fame and Museum.  The site will include info on our goal to become a non-profit and within five years have a museum for fans to visit.


Thanks for your support!

The 2011 Class (along with inductors) are as follows:

The 2nd Annual Will Grason Memorial: A Night of Champions event is set to take place in the same venue (Communtiy Fellowship Ministries in Douglasville GA) at 7:30pm on the same night and stars from every promotion in Georgia are set to appear with MANY promotions being represented in a championship match by one of their champions!!!

We will have ticket info & much more very soon!


The card for the 2nd Annual Will Grason Memorial will feature at least six of Georgia's independent professional wrestling promotions defending one of their championships!

Plus the exciting 2nd Annual Will Grason Memorial "Battle Rumble". A 20 man battle featuring wrestlers from all over the state of Georgia.  The winner of last year's Battle Rumble, Inmate Spike, will be present to defend his honor.  It will be Team WILLpower vs Team Chaos in the Battle Rumblel!! Stay tuned for more info.

Thanks to all of the promotions involved!!  Without your help WILLpower would not exist!

We will keep this page updated to give you as much information as possible as the date of the show approaches.

Holy Hip Hop Batman!  We are going to blow the roof off the gym!!

iDie will be opening the show with his own brand of Christian hip-hop beginning at 6:50.

Check out idiemusic.com for more information on the latest addition to the WILLpower family.

Championship Wrestling Overload will defend on of their championships!

Milledgeville, GA based Championship Wrestling Overload will be putting their Georgia Heritage Title on the line!

This going to be a great match to open the show.

It will be the first match of its kind at a WILLpower show!!

Winder, GA's Future Federation is the latest addition to our partner promotions,

The place is going to go crazy!!

Mid-Georgia Championship Wrestling will defend one of their titles at the show!

Stockbridge, GA based Mid-Georgia Championship Wrestling has agree to put one of their titles on the line at the show.

Check back soon to see which title will be defended on July 23rd.

NWA ProSouth Wrestling has agreed to defend one of their titles at the show!

This promises to be a very exciting match!!

Peachstate Wrestling Alliance will defend one of their titles at the show!

Carrollton, GA's Peachstate Wrestling Alliance will be defending one of their championships at the show.

Check back soon to see which PWA title will be on the line.

Universal Independent Wrestling will defend one of their championships at the show!

Franklin, GA based Universal Independent Wrestling will put one of their championships on the line at the show.

Check back soon to see who will represent UIW on July 23rd.

Join us after the show for a Bon Jovi Karaoke Party at BB's!!

Will loved to sing karaoke at BB's when it was under a different name.  It is the same great place, look for Will's photo on the wall!  Every Tuesday night Will would come in and sing as many Bon Jovi songs with DJ Dice as he could before his bed time.

The Bon Jovi Boi sing a long starts at 10pm and Dj  Dice will there until 2am!! Start practicing!

Thanks to BB's for helping make memories come to life!