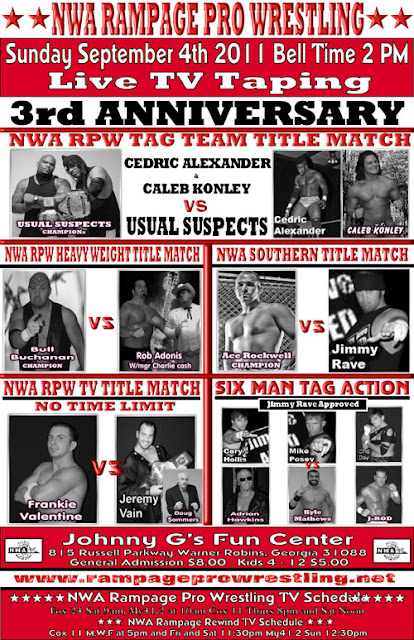 Ben Masters comes out to inform everyone that in two weeks, NWA Rampage Pro Wrestling will be celebrating their 3-Year Anniversary. He then goes on to review the competitors scheduled to compete on today’s card.

Moore served as somewhat of a comic relief, as he frequently was getting frustrated at his failed attempts to take advantage of the match and often insulted the ref and his opponent. After about 4 minutes, Cash gets involved by preventing Konley from successfully jumping from the top rope, allowing Moore to capitalize. Cash was noticeably annoyed when Moore was on the short end of the match and even when he was showing off while having the upper hand. Konley takes over the match around 7 minutes in and lands some very impressive strikes to Moore before being slammed face-first into the turnbuckle. In the end, Konley wins with an Inverted Knee Facebuster.

Sal and Adler start off with some impressive technical wrestling. Andrews tags in but promptly tags out when Jacobs is tagged in against him. When Marv enters the fray he continuously appeals to the crowd to get them more vocally involved in the match. Somers managed to trip Marv without being noticed by the ref and the team lead to the ring by Andrews gained the advantage, tagging out to each other to keep Marv worn down. Marv fights back, and hot tags Adler in around the 8 minute mark. Everyone gets involved, with Jacobs and Andrews tagging in as the legal men. Andrews is knocked out of the ring during the fray and goes to hiding under the ring. When Marv and Adler dive to the outside to take down Rinauro and Vain, Andrews sneaks in behind the now alone Jacobs to land a Rolling Cutter for the win.

Cash seemed much less frustrated with Adonis through the match, even when he was losing or showing off. Adonis holds the advantage for much of the match with the impressive strength and overwhelming size that he boasts. Just as Valentine was making a real come back, Jeremy Vain and Doug Somers come to the ring and attack him, prompting a disqualification.

Doc Gayton comes out with a chair to make the save. He then gets a mic and cuts a promo stating that the No Time Limit Match that Vain still owes Valentine for the Television Title will be held at RPW’s 3rd Anniversary show.

These two put on an amazing match. It started almost exclusively technical until Hollis was kicked from the ring around the 3 minute mark. Upon returning to the ring, the match seemed to get more violent as Hollis continues to get angrier at J-Rod, and the two start using more and more blows to replace some of the technical wrestling they started with, as well as even getting in some trash talking. When Hollis took advantage, the crowd would always start making some noise for J-Rod. Every time J-Rod would kick out of a pin or escape a submission, Hollis would get even more frustrated. After a brief come back from J-Rod, he show boats for a few seconds and is rolled up by Hollis, tights in hand, for the finish.

Corey Hollis wins via Pinfall at 9:02

Banks briefly mentions the new Hot Like Lava shirts being sold. Banks and Jones do a lot of trash talking in this match. Alexander gets the crowd excited with some excellent technical wrestling before moving on to strategically tagging back and forth to stay fresh against a worn down Shaun Banks. Cru Jones tags in and both teams seem to stay on even ground for the rest of the match. At one point Cru and Banks illegally switch behind Referee Stan Robinson, which is nothing new to their trick list. Hot Like Lava keep advantage for a while until Alexander lands a surprise Bulldog and hot tags Konley around 7 minutes in. 7Oh!4 seem to have the match won when they catch Banks alone and land a double team move combining a kick to the back of his head with an Inverted Russian Leg Sweep, but Banks kicks out and escapes the ring. Banks then gets himself Disqualified by deliberately using the Tag Title belt as a weapon.

Result: 7Oh!4 wins via Disqualification (illegal object use) at 8:48

During the brief break we are shown some interviews that Ben Masters did during NWA Legends Fanfest, including the likes of Mr. Wrestling #2, Austin Idol, and Greg Valentine.

Rave tells Matthews that since he took care of Ace Rockwell in NWA Chattanooga the night before, he could just simply quit and leave. After the crowd gets behind Matthews, he agrees to wrestle the match alone. Matthews does a good job of annoying the Approved group in the early portion of the match and even goes out of the ring to hit Jimmy Rave. Rave gets a little pay back by attacking Matthews but is dismissed from ringside by Referee Stan Robinson. Matthews succumbs to the numbers game for a while with the Approved team using a lot of their double team tactics on him. Matthews eventually makes a come back and pushes Chip Day from the ring, who pulls out the referee shortly after to interrupt a pin attempt. With the referee focused on Chip Day, Sal Rinauro comes out and delivers a Low Blow to Matthews and leaves. Posey picks up the win.

Rave, Sal, and Corey all come out and they all continue to attack Kyle Matthews until Doc Gayton comes out. He tells them that Sal is suspended and that the next person who attacks Matthews will suffer the same punishment. He then goes on to say that if Sal is seen in the RPW Arena or even at Johnny G’s Fun Center during his suspension that he will be fired.

AJ and Cru start the match off by trying to overpower each other with their strength. Murder is eventually brought in and spits in the face of Banks, causing him to enter the ring illegally but is stopped by the ref. Surprisingly, the Suspects didn’t utilize this distraction to perform anything illegal like their opponents would have. Once Banks does tag in, Hot Like Lava manages to take advantage with their usual double team tactics. AJ Steele is noticeably vocal from the apron, breaking his vow of silence, when Hot Like Lava would use illegal tactics behind the referee. The more Hot Like Lava pinned and took down Murder One, the more he would kick out which lead to them getting increasingly frustrated with him. Murder comes out of nowhere with a Cutter, which he usually uses as his finisher, and hot tags AJ Steele in around the 10 minute mark. Banks and Jones attempt to get themselves Disqualified by using the Titles as they did with 7Oh!4 earlier. Cru holds Steele as Banks attempts to hit him, but AJ ducks out and Cru takes the blow. Murder One gets in the ring and they land a Double Choke Slam on Shaun Banks for the victory.

Confirmed for the 3 Year Anniversary show:

It's an interesting thing to note that Adrian Hawkins is scheduled to compete. This would be the first time since he was assaulted by Jimmy Rave Approved after his decision to not join them back at Memorial Mayhem.