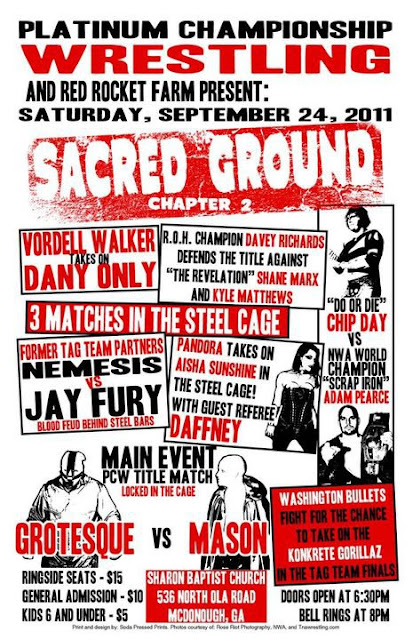 Dwight Power and Tommy Daniels wrestled to a double-DQ;

Notes from the show:

When Miss Rachael declared that nobody had ever beated Grotesque cleanly in a match, and if they had that they would get a title shot, The Phantom appeared and blinded Grotesque with a mysterious mist spewed from his mouth. The Phantom, in fact, had beaten Grotesque in a strange referee stoppage more than a year ago, where Grotesque never left his feet but nontheless was choked out. After that match, Grotesque suddenly sprang to life and attacked the referee, took apart the ring and attacked wrestlers with the turnbuckle steel and the ring rope, and famously marched through the crowd, sending them running everywhere. PCW Champion Grotesque will face The Phantom for the PCW Title on August 26th in order to abide by the 30-day rule of defending one's title

Dany Only has been announced to take on "The Shooter" Vordell Walker at Sacred Ground: Chapter Two

"Hand of Steel" Seth Delay won the second match in the Vandal Invitational, going up in the best-of-seven series 2-0

The final match in the series between the Washington Bullets and Shane Max and Mason will take place on August 26th. The winner will face The Konkrete Gorillaz (Brian Blaze and Geter) at Sacred Ground: Chapter Two on September 24th


Also on August 26th, Lee Roy will face De La Vega in a Kumite match. Lee Roy is unfeated in Kumite matches, where the ropes are removed and victory is attained through knocking out your opponent, forcing him to tap out, or knocking him off of the mat.

De La Vega returned with Prima Donna in tow, and the two cut an incredbily bizarre promo featuring Prima Donna decked out in a kimono and speaking Japanese, and De La Vega alternating between laughing and being extremely serious. De La Vega implied that Oscar Worthy would join them next week.

Stephen Platinum announced that the ROH title match at Sacred Ground: Chapter Two would be done under a set of rules known as the Platinum Trinity Rules -- when one of the wrestlers pins or submits another, that defeated wrestler is put out of the match. The remaining two wrestlers have five minutes to defeat the other, or the previously eliminated wrestler is put back into the match. This is to assure that truly the best wrestler wins

Pandora versus Aesha Sunshine (Daffney is the special referee)

Dany Only versus "The Shooter" Vordell Walker

A Platinum Royal will take place, and the winner would, in theory, be able to challenge any of the champions on the Sacred Ground: Chapter Two card at a later date
at 5:09 PM