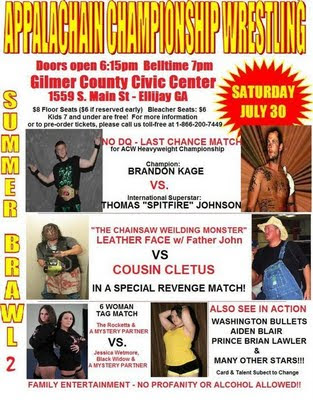 It is time for the hottest event in Ellijay, ACW! We proudly present to you, "Summer Brawl II."

"Spitfire" Thomas Johnson has demanded, and received, another shot at the ACW Heavyweight Championship. However, if Johnson is unsuccessful in beating Kage, he will no longer be eligible for a title match as long as Kage is the champion. Therefore, it's a Last Chance, No DQ Match.

The end of the long ACW feud between The Rocketts, Jessica Wetmore & The Black Widow will take place. It will be a six-woman elimination tag team match, with a mystery partner for both teams. Will The Rocketts finally get some revenge?