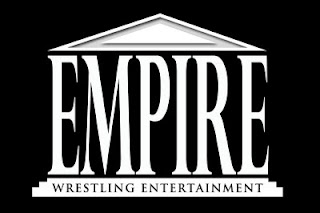 In the opening match, Dru Delite defeated Lamar Phillips who was making his Empire debut.

Next up was JC Kent vs Jerry Anderson with Jason Hampton at ringside. As Kent attempted a sunset flip, Anderson blocked it and sat down on Kent for the pin. Hampton then grabbed Anderson's hands helping him pin Kent for the 3 count. after the match, Hampton and Anderson beat down Kent, until Ben Thrasher hit the ring and chased Jerry and Jason off.

Jason Hampton with Jerry Anderson vs Ben Thrasher was next. As Ben was set up to hit the 10 punches in the corner, Hampton hit a low blow on Ben. Then hit a powerbomb, and pinned Ben, using the ropes as leverage. After the match, Jason and Jerry attacked Ben until JC Kent made the save.

Next up was a Triple Threat match between the returning Chris Ganser, "The World's Greatest Athlete" Johnny Viper, and Micah Hughes. Viper was tossed outside the ring and Micah hit his finisher on Ganser. However, when Hughes went for the pin, Viper pulled him out of the ring and pinned Chris for the victory.

The main event was The Reaper vs Big Doug. Doug spent the whole match trying to remove the mask of The Reaper. Big Doug hit the TKO but as he went to pin The Reaper, Jason Hampton and Jerry Anderson hit the ring again and beat down Doug. Ben Thrasher and JC Kent made the save and chased off Jason, Jerry, and The Reaper.

We hope you enjoyed the show and we hope you will join us next week for another action packed Saturday Night of Empire Wrestling.
at 11:47 AM