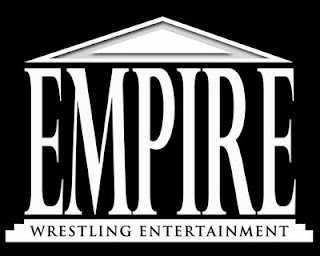 We have received word that Logan Alvey will be in the building this Saturday night. I'm not sure yet if Logan will be wrestling as he is listed as "Questionable" on the Empire Roster Injury Report, but I am certain we will hear from Logan, and get the facts on how he was ambushed as he was heading to the ring last Saturday night. Logan's popularity has grown by leaps and bounds over the last 3 months, and I'm sure his dedicated fans will be out in mass to hear from this young man from Chattanooga, TN.

In other match signings waiting on my desk this morning, the "benevolent" Empire Commissioner The Reverend has granted "Wyld Stallyn" Corey Cox a non-title match with Empire Heavyweight Champion Rufus Black. These "Wyld Stallyns", Corey Cox and Chris Ganz, have shown no fear since joining up, as they have faced "The Devil's Rejects" in tag team battle, but for Cox to face Rufus Black will be a tall order, as when you face 1 "Reject"....there's always more lurking in the shadows.

You know fans, the Empire has THE matchups, THE talent, and THE competition that keeps us all impatiently waiting on the next Saturday night to come around, and this next match I'm announcing will have The Empire on it's feet:

The Reverend has granted Drew Delight a match against "Devil's Reject" Andrew Alexander and this match has high stakes. If Drew wins, he will receive 1 last shot at the Empire Heavyweight Title, held by "Reject" Rufus Black. If Delight loses, it is guaranteed he will never receive another shot.

For those of you who may be new to The Empire, Delight held the belt before Rufus Black acquired the title. And by "acquired", I mean just that. Late last year, Delight was ordered by The Reverend to surrender the title to the "Rejects". Drew would not hand the belt over and was left a bloody mess by "The Devil's Rejects".

Lo and behold, the following week, Rufus Black was PRESENTED the Empire Heavyweight Championship by The Reverend, accompanied by the celebrating "Devil's Rejects". There's nothing more Drew Delight wants than to wear that Empire gold around his waist once more. Drew I hope you have some reinforcements lined up for this match, as I earlier stated, when you face 1 "Reject"...there's always more lurking in the shadows. I know Drew Delight and he is going to do everything in his power to defeat the "Southeastern Strangler" Alexander to get another shot at Rufus Black and the Empire Heavyweight Title.

2012 Is The Year Of The Empire And We Sincerely Appreciate Our Fans Showing Up Each And Every Week To The Empire--Where The Titans Collide!
at 1:47 PM