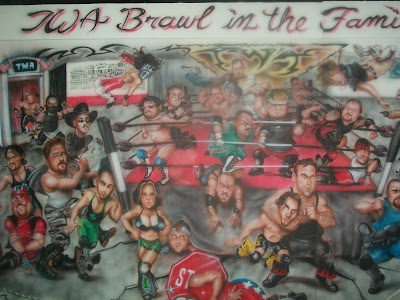 “Lion Heart” Ray Fury defeated “The Future” Wil Force in a non title bout. This was a great opening match for the show and it really set the tempo for the night. Ray Fury captured the win with the DVD.

Next came a singles match between “Simply Amazing” Alex Summers and Da Bill. Da Bill Came out first with a mask on to boos from the fans and told them that last week he said if he didn’t beat Ray Fury for the Action Zone Title that he would never show his face at TWA Action Zone again, and that was a blessing in disguise because that meant all the ugly stupid faces could not look at his perfect face ever again, Da Bill said that he was taking the night off when Alex Summers music hit and he came out to challenge Da Bill. In what turned out to be a great match with a lot of action Alex shot Bill into the corner and charged in and Bill moved and rolled Alex up with a school boy and had his tights for the cheap victory.

Next was “The One” Joey Idol took on the returning Skull, the match was a great technical match between two guys that know each other very well and as usual for Skull he used underhanded tactics to gain the advantage over Joey but in the end Joey surprised Him with a quick roll up for a victory.

Winner “The One” Joey Idol

Next was tag team action as HCP 2.0 took on Jam Styles and Mr. TC the 2nd. This match was totally dominated by HCP 2.0 and the victory came quick but all three members of HCP 2.0 kept on with the attack to their opponents till Ray Fury and Honor&Respect made the save. After HCP 2.0 left the ring they announce that they would be the first team in the Bill Needham Memorial 6-Man Tag Tournament on Feb. 18th. So Honor&Respect and Ray Fury followed suit and announced that they would be the 2nd team in the tournament.

The action continued as the Playmakers took on Ray Fury and Tiffany in a mixed tag match. Great action in this match and the end comes when Kevin Green comes to ring side and steals Ray’ championship belt and draws him away from ring side leaving Tiffany to get pinned by Fantasy.

Main Event of the night saw “Star Quality” Josh Vaughn defend the Southern Title against Toy Dodson. Great match between two great competitors. This match lived up to all the hype and in the end we have a new Southern Champion as Toy Dodson picked up the victory with the help of his manager Kevin Green and a flaming chop to Josh Vaughn’s chest.

We at TWA would like to thank everyone for your support and well wishes to Doug Watkins promoter of TWA. Thank you everyone.
at 5:02 PM