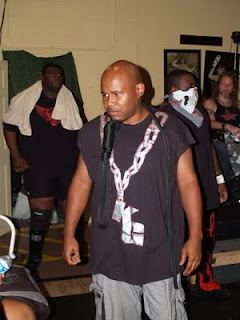 It was one of the most volatile shows in PCW history, and the various suspensions and sanctions laid down as a result of the show reflect that. To whit:

Pandora is suspended for the remainer of June for her attack on Stephen Platinum and Dr. MeLei

"Spitfire" Thomas Johnson is suspended indefinedly for multiple attacks on wrestlers who he was not in matches with, including Jamie Holmes and Jerry Lewis Jr.

Mason is now the official partner for "The Revelation" Shane Marx. Their record stands at 5-4, the same as the Exotic Ones, who will face one another next week on June 24th. The winner will go on to face the Washington Bullets in the playoffs in a best-of-five series in the Alpha Division.

The Omega Division playoff teams are set, as the team of Completely Awesome will take on the Konkrete Gorillaz in a best-of-five series. The first match in that series will take place July 1st.

The Vandal will face PCW World Champion Grotesque in the main event of the June 24th show.

The Empire, a group consisting so far of Mark James, Ty Tyson, Roland Dyce and "The Perfect Knockout" Samantha Starr have threatened to take over PCW and rename it Empire Wrestling

Zackary Blane has been accepted as a probationary member of Completely Awesome, whose members include "Awesome" Zach Daniels and "The Complete Attraction" Chad Silva

An offer was put out to Jamie Holmes to join the Assassin's Guild. He refused.