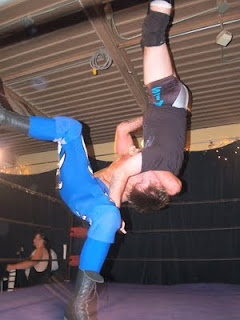 Kurt Killgore returned to PCW and is officially managing the Warhorses

"Record Breaking" Tommy Daniels has done it again. He holds the record for the fastest pin in PCW history (18 seconds), he handed Sylar Cross his first single's loss, and now has snapped both Marko Polo's undefeated streak and his unblemished record.

PCW World Champion Grotesque now adds attacking a referee to his most infamous reign as champion. The Vandal never officially received his title match, so he will be granted one at a later date with a stipulation of his choosing.

The Tag Team Season playoffs officially begin on July 1st as The Konkrete Gorillaz take on Completely Awesome, and the team of Shane Marx and Mason take on The Washington Bullets in the first matches in best-of-five series.
at 1:43 PM