News regarding Platinum Championship Wrestling's show, 10/20, at the Masquerade 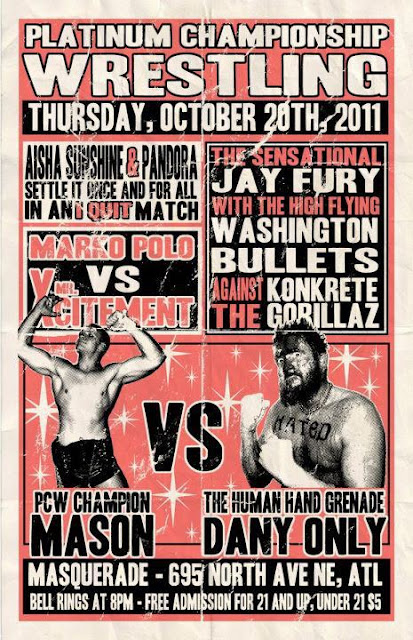 News regarding Platinum Championship Wrestling's show, 10/20, at the Masquerade

Vordell Walker and Kyle Matthews are forming a tag team and will be debuting as a team on October 20th for PCW's show at the Masquerade. They are two of the best technical wrestlers today, but it's unclear exactly why Vordell and Kyle are teaming up. Both Vordell and Kyle have said that the team is one put together for a very clear purpose and wouldn't say much more that that, except to add that on October 20th the wrestling world will get to see the soon to be greatest tag team in wrestling.

The newer wrestling students at the Kayfabe Club (a wrestling school affilliated with Platinum Championship Wrestling) were said to be in awe of the team in workouts that Vordell and Kyle had in preparation for their debt.

See this new amazing team as part of an incredible show!

www.masq.com and Platinum Championship Wrestling on Facebook for more information!

The main event is for the PCW title, as new champion Mason takes on "The Human Hand Grenade" Dany Only, fresh off of his win over Vordell Walker at Sacred Ground: Chapter Two

It's the greatest feud in women's wrestling...and it's got to end sometime. Pandora and Aesha Sunshine have put on classics at the Masquerade. They wrestled in a First Blood match. They wrestled a shocking Last Woman Standing. At Sacred Ground: Chapter Two they fell off a cage through tables! Now they return to the Masquerade to make the other say two tiny words..."I Quit."

"The Sensational" Jay Fury and The Washington Bullets take on all three of the Konkrete Gorillaz, Nemesis, Brian Blaze and Geter!

Mr. Xcitement has made a splash since he debuted in PCW. His good looks, body of a greek god and larger than life personality have put him at odds with PCW's resident egotist Marko Polo...and they come to the Masquerade to settle it!

Don't miss PCW's show this Friday at the Academy Theater-

Platinum Championship Wrestling at the Academy Theater on Friday! Bell is at 10:30 p.m. this week!

In the main event, Dany Only takes on "The Revelation" Shane Marx! The perhaps soon-to-be PCW Champion versus a former PCW champion!

"Do Or Die" Chip Day takes on "Awesome" Zach Daniels!

"Do Or Die" Tommy Daniels and a mystery partner take on "Wildchild" Joey Kidman and Michael Hirsch!

Plus: PCW Champion Mason! De La Vega! The Warhorses! The Washington Bullets! The Vandal! And more, much more!
at 11:25 AM