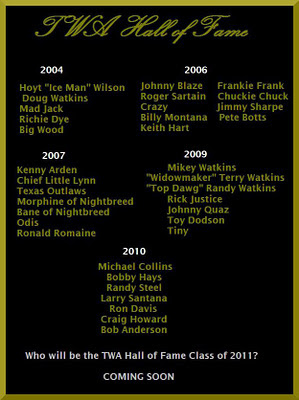 
TWA's Queen of the Ring, Jessica Wetmore, has ran through all the competition there is to offer in the tri-state area & has put out an open challenge to any female wrestler that is out there trying to make a name for themselves. Don't mistake Ms. Wetmore for your average ladies wrestler as she will get in there & mix it up with gentlemen as well but she wants someone to try to dethrown her of the TWA Queen of the Ring Championship. She has stated that she doesn't care whether it's friend of foe that she will take on all comers.

"True Italians", "True Italian Bad Boy" Chad Guiliani & "Italian Thuroughbred" Tristan Daniels, along with "The inFamous One" Adam Stevens have made their presents known in the last couple of weeks. Mr. Guiliani came from out of the crowd after his tag-team partner Mr. Daniels lost a hard, fought match-up with Ray Fury, jumping him with Chad's ex-tag-team partner, Chip Hazard, coming out to save Ray.

A heated rivaly has started between the "True Italians" & Ray Fury and Chip Hazard but Mr. Stevens let everyone know in the TWA Arena why they were truly there. "The inFamous One" put Big Will & "Top Dawg" Randy Watkins on notice that they were there for one thing & only thing only and that was for the TWA Friday Night Brawl Tag-Team Championships. That they were tired of Will & Randy ducking & doding them and it was time to settle it once & for all.

It seems that Chip Hazard might have stepped into something with the "True Italians" before he had finished unfinished business as this past week the "Fabulous Blondes", Casey Cage & "All Business" Brian Rivers hit the ring and jumped Chip from behind after a grueling match with Mr. Guiliani & Mr. Daniels.

It seems that Chip & his absent tag-team partner, Johnny Rokk, better known as "The Headliners" have been talking a little trash about Mr. Cage & Mr. Rivers challenging them to a match. Well this past Friday night it seems that the "Blondes" have answered "The Headliners" challenge by jumping Mr. Hazard. After Chip made it way back to his feet he accepted their challenge where the "Blondes" said that they wanted "The Headliners" careers. Chip told Casey & Brian that they would put up their careers but they had to put something up themselves. Chip paused for a second & said if their careers are on the line then the "Blondes" had to put their blonde hair up for grabs.

3rd generation star Trevor Watkins gave the TWA Friday Night Brawl Heavyweight Champion, Michael Cross, a run for his money last Friday night with an upset victory over the champion. Could Trevor be the one to take the championship way from Mr. Cross? The kid has the heart, the will power and the drive as he showcased it this past Friday night.

So this Friday night will anyone answer the "Open Challenge" of the TWA Queen of the Ring Champion Jessica Wetmore? Will the "True Italians" get their hands on the TWA Tag-Team Champions "Big" Will & "Top Dawg" Randy Watkins and walk away the new TWA Tag-Team Champions? Did "The Headliners" bite off more then they can chew in challenging the "Fabulous Blondes" to match & lose their careers or did the "Fabulous Blondes" write a check that their butts won't be able to cash & lose the precious goldy locks come this Friday night? Will Trevor Watkins get a championship match against the reigning TWA Friday Night Brawl Heavyweight Champion Michael Cross and pull the biggest upset of TWA's almost 21 year run?