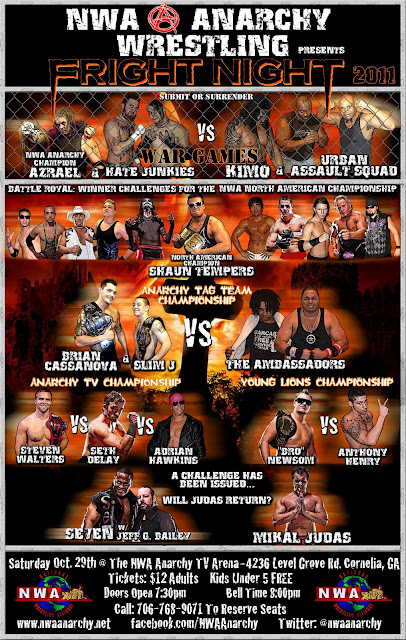 NWA ANARCHY presents "FRIGHT NIGHT 2011" next Sat, Oct 29th @ 8pm. It's WAR GAMES in a Steel Cage as KIMO & THE URBAN ASSAULT SQUAD take on Dan Wilson's trio of darkness THE HATE JUNKIES & AZRAEL. It's submit or surrender in this fight to the finish.

Plus, many competitors participate in an Open-Invitation Mega Rumble to determine the challenger for Shaun Temper's NWA North American Title later that night.

And, suspicion has been building; the challenge has been issued. Will MIKAL JUDAS return to face SE7EN along with JEFF G. BAILEY following the brutual attack several weeks ago?