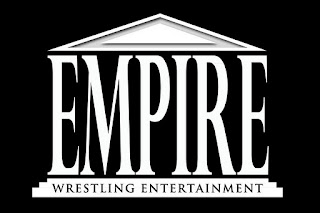 The temperature was cold outside last night but the action was hot hot hot inside the Empire Arena! If you was unable to joins us last night, here is a recap of last night's action.

The show opened up with Cyrus vs "The World's Greatest Athlete" Johnny Viper. IT became clear very early that Viper did not want this match to happen. He even resorted to bringing another chair into the ring. However, Cyrus quickly disposed of the chair and made very quick work of Viper. Cyrus wins after hitting Viper with a Massive Baldo Bomb.

A Triple Threat match was up next between Korrupt, KT Hamill and, making his Empire debut, Corey Dye. Korrupt was able to pick up the victory.

Announcer Buzz got into the ring to talk with Korrupt but before he could, Devil's Rejects members Andrew Alexander and Seven made their way to the ring. Andrew looked at Korrupt and said "I'm Sorry," Then Seven hit a clothsline, a Bicycle Kick, and a Sitout Slam. Andrew and Seven then left with Korrupt laid out in the middle of the ring.

Next up was a tag team match between Xtreme Generation (Jason Hampton & Jerry Anderson) and JC Kent and his new tag team partner, Rush! Before the match started, it was announced that this was a #1 Contenders match for the Empire Tag Team Championships. It looked like Rush and Kent were going to win. But, Kent went to hit Hampton with a Full Nelson Slam. When Kent picked up Jason, Hampton kicked Rush who was setting up to hit the Stunner on Anderson. Kent dropped Hampton to check on Rush. This allowed Jason Hampton to roll up JC Kent and put his feet on the ropes to pick up the victory. Xtreme Generation are the #1 Contenders to the Tag Team Championships and will face the Tag Team Champions next week. Kent went to check on Rush after the match, and Rush told Kent to "Get your stuff together," and left. Announcer Buzz got in the ring and asked for a minute of JC Kent's time. Buzz said he was a big fan of Kent but it seems like JC's head just isn't in it. Buzz then asked JC what was next. JC just walked out of the arena without answering the question.

Hammerjack, who was making his Empire debut defeated Ganz

We have one match already set for next week as Empire Tag Team Champions Ben Thrasher and Jessco Blue will defend their titles against Xtreme Generation (Jason Hampton & Jerry Anderson). More matches will be added throughout the week so check back often!
at 10:16 AM