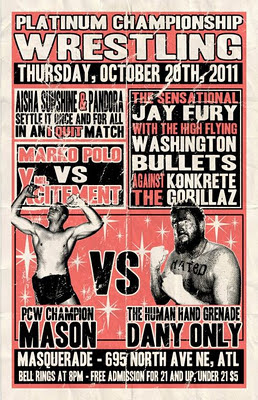 www.masq.com and Platinum Championship Wrestling on Facebook for more information!

The main event is for the PCW title, as new champion Mason takes on "The Human Hand Grenade" Dany Only, fresh off of his win over Vordell Walker at Sacred Ground: Chapter Two

It's the greatest feud in women's wrestling...and it's got to end sometime. Pandora and Aesha Sunshine have put on classics at the Masquerade. They wrestled in a First Blood match. They wrestled a shocking Last Woman Standing. At Sacred Ground: Chapter Two they fell off a cage through tables! Now they return to the Masquerade to make the other say two tiny words..."I Quit."

"The Sensational" Jay Fury and The Washington Bullets take on all three of the Konkrete Gorillaz, Nemesis, Brian Blaze and Geter!

Mr. Xcitement has made a splash since he debuted in PCW. His good looks, body of a greek god and larger than life personality have put him at odds with PCW's resident egotist Marko Polo...and they come to the Masquerade to settle it!