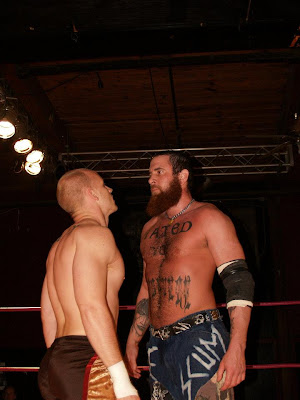 Pandora and Aesha Sunshine had no decision in their "I Quit" match;

The Phantom defeatedMarko Polo by tapout;

The Vandal defeated Seth Delay by submission in match seven of their best-of-seven series;

On Friday, October 28th at the Academy Theater there are two main events: Davey Richards takes on Kyle Matthews, and PCW Champion Mason takes on The Vandal

Thursday at the Masquerade, Daisho (Kyle Matthews and Vordell Walker) scored the fastest tag win in PCW history with a 40 second win...and the next night the Washington Bullets matched that, beating CAMPUS Strike Force in that same time of 40 seconds.

Pandora vowed that the "I Quit" match between she and Aesha never officially ended, so she will stalk Aesha and force her to say those words.

De La Vega was injured by The Empire after scoring the win for his team on Friday night. In light of his injury and Aesha Sunshine joining the Konkrete Gorillaz, they have been replaced on Team PCW for the 10-versus-10 elimination match on Nov. 11th by the Washington Bullets.

On November 11th, the Empire and PCW will each field teams to face one another in a 10 versus 10 elimination match to determine which company will be the name of the company, and which group will have to disband. The Empire team will consist of Miss Rachael (captain), Dany Only, Union Jack, Sylar Cross, Master Jae, "Wildchild" Joey Kidman, Michael Hirsch, Zach Daniels, Zackary Blane, and a 10th member who "Screamin'" Marty Freeman has apparently found while on his honeymoon with Miss Rachael. Team PCW will consist of Stephen "Lethal Litigator" Platinum (captain), current PCW Champion Mason, Jay Fury, "The Revelation" Shane Marx, "Record Breaking" Tommy Daniels, Mr. Xcitement, "Do Or Die" Chip Day, The Phantom, and The Washington Bullets (Jon and Trey Williams.)
at 10:48 AM