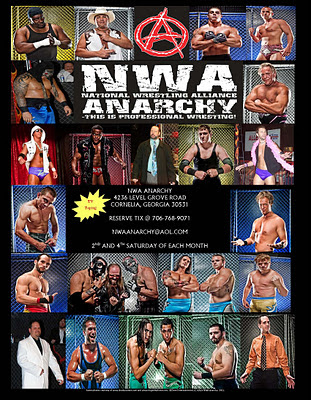 Show started with ring announcer Brett Wolverton saying that at Fright Night on Oct 29, an open invitation Battle Royal will be held with the winner facing Shaun Tempers for the NWA North American Title later that night.

Donnie Steamboat def JC Walker. Postmatch Sev7n attacked both men then Jeff G Bailey talked about Sev7n having eliminated G/M JT Talent and that Mikal Judas was gone too after being burned at his hands weeks before. Brody Chase came out and replied that he trained Judas and that Judas was more of a monster than Sev7n and that he would return and Sev7n & Bailey would pay.

Adrian Hawkins def Johnny Dangerous with the sharpshooter. Postmatch he locked it in again until Lane Vasser hit the ring to help his tag partner.

Mike Posey & Corey Hollis def Steven Walters and Seth Delay after Adrian Hawkins, who was at ringside, use the brass knuckles on Delay when the ref had his back turned. It was announced that Adrian Hawkins would face Steven Walters for the NWA Anarchy TV Title at Fright Night.

In a match to determine who was one half of the tag team champions with Brian Casanova, Slim J def Andrew Pendelton III when with the ref down, Casanova hit the ring and chose Slim J, hitting his finisher on Pendelton. Postmatch The Ambassadors with John Johnson attacked Casanova & Slim J leaving both down in the ring.

Anthony Henry & Jacob Ashworth def Shaun Tempers & Bo Newsome when Henry pinned Newsome. Brody Chase was intended to be Ashworth's partner but was attacked by Sev7n before the match. It was announced that Anthony Henry would challenge Bob Newsome for the NWA Anarchy Young Lions title at Fright Night.

The Main Event between The Hate Junkies & Azral with The Rev vs Kimo & UAS (Shadow & Nemesis) ended in a no contest where for the lockerpoom cleared to separate the men. Franklin Dove announced that all 6 would compete in WAR GAMES at Fright Night in a Steel Cage.

Next Show is Saturday, 10-22 with Sev7n with Jeff G Bailey vs Brody Chase plus a singles match to determine the entrance advantage in War Games at Fright Night on 10-29 between Azrael with The Rev vs Shadow Jackson.
at 9:50 AM